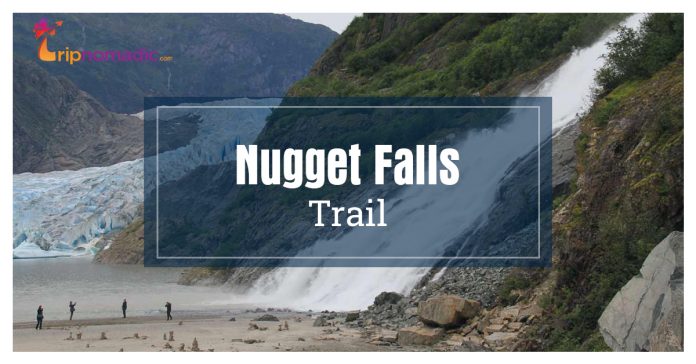 The waterfall highlight of our Alaskan cruise through the so-called Inside Passage was by far Nugget Falls, also known as Nugget Creek Falls or Mendenhall Glacier Waterfall (or “the waterfall by Mendenhall,” as we like to call it).

The reason this waterfall was so special to us waterfall enthusiasts was that it gave us a good reason to see the stunning Mendenhall Glacier’s blue ice terminus as well as a chance to observe enormous black bears fishing for sockeye salmon.

Unfortunately, we missed the opportunity to see the brown bears, but many people claimed to have done so (call it bad timing and bad luck on our part).

However, the opportunity to witness all of this while visiting a waterfall was what really made us happy to be here.

However, Nugget Falls itself wasn’t a slouch.

Unlike other glaciers we’ve visited, this one had a real size and volume, unlike others where smaller mountain cascades—some of which had names—would spill toward the glacier.

We were able to stand directly in front of Nugget Falls and turn to the left to get a clear view of the impressive Mendenhall Glacier, but its shape was very reminiscent of, say, Norway’s Friaren.

We estimated that Nugget Falls was about 100 feet or so tall.

The literature claims that the falls are 377 feet tall, indicating that there may have been higher tiers that we were unable to see.

The falls also fan out and have a base that measures about 100 feet across.

As part of the East Glacier Loop, the distance to the Nugget Falls was a very short and flat 1.5 miles roundtrip.

It is said that this hike can be completed in a leisurely 45 minutes, but we probably took longer because we tried to take in the scenery whenever we had the chance.

It seems that we arrived just as trail improvements were being made to make the already simple walk even simpler.

To be honest, there were a few different paths we could have taken to reach Nugget Falls, and they both connect at the trail’s opposite ends so that both can be completed in a loop.

We traveled along a broad dirt trail that crossed a few small streams because Mendenhall Lake was practically beneath the trail’s level.

We didn’t want to go with the crowd, so we took the lower route because we knew that most people wouldn’t have the proper footwear for the benign stream crossings and muddy patches.

We came across a bear paw print in one particular area, which led me to believe that bears frequented this area as well as Steep Creek, where they would go sockeye salmon fishing.

The large sandbar at the base of the Nugget Falls and the Mendenhall Lakeshore were both immediately accessible after this rocky traverse.

This was probably as close to the glacier as we were going to get as waterfall hikers.

As previously mentioned, there was an upper section of this trail that could be connected to the lower beach trail (the one we took) to form a loop.

They even installed the necessary infrastructure so that we could use our phones to download an app that offered an intriguing interpretive history of some of the route’s numbered stops.

We had definitely never seen that before, but it seemed like a clever way to avoid printing interpretive pamphlets or books.

We’ve heard rumors that occasionally the lower trail would become inundated because of heavy rains, high tides, or even a wave brought on by a glacier that was calving.

Therefore, we assume that it is possible that the lower part of the trail might not be passable in such circumstances, leaving only the upper trail open to access Nugget Falls.

The boardwalk rose above Steep Creek, which appeared to be the perfect place for salmon to spawn and which the neighborhood’s black bears appeared to enjoy feasting on.

Fish carcasses and bear paw prints were unmistakable signs of their presence.

From mid-July to mid-September, sockeye (red) salmon were rumored to visit Steep Creek.

Additionally, it was claimed that from mid-September to the beginning of October, coho (silver) salmon would visit Steep Creek.

We were able to see some other glaciers from an observation deck close to the visitor center as well as from various locations along the Nugget Falls Trail.

In some of these locations, we were even able to get a closer look at some of the icebergs that the calving glacier had left behind.

10 Mouthwatering Food Chains In The USA

10 Mouthwatering Food Chains In The USA

5 Adventurous Things To Do In Long Beach, Washington

Best Things To Do In Kent, England – Top 5 Attractions To Visit With Your Family

ABOUT US
Welcome to India, the land of diverse people, cultures, faiths, and spices. Despite its crowded streets and bustling streets, India never fails to impress travellers coming in from different corners of the world with its feel like home vibe.
Contact us: info@tripnomadic.com
FOLLOW US
© Copyright Tripnomadic.